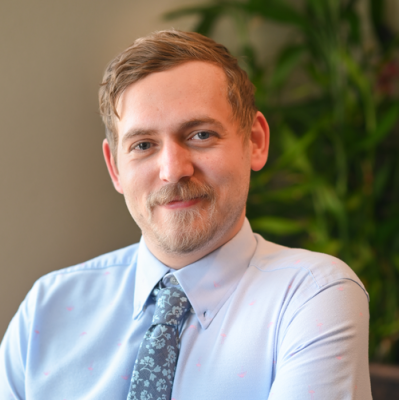 Dr. Cole Vilhauer was born and raised in Frisco, Texas. Growing up he always wanted to be a doctor. In elementary school, he received his first pair of glasses. Which was an eye-opening experience that would impact the rest of his life. After talking and working with his local optometrist in Frisco, whom he saw regularly for his significant nearsightedness, he decided that optometry was the profession that was meant for him.

He attended Texas Tech University where he graduated with Honors and a Bachelor’s degree in Nutritional Science. During his undergraduate years in Lubbock he worked for a local ophthalmologist and optometrist, gaining invaluable experience that solidified his career choice. He was also highly active in the Phi Kappa Psi gentlemen's fraternity and the Honors college. Dr. Vilhauer then attended and graduated from the University of Houston College of Optometry, fulfilling his long sought-after goal. During his tenure at UHCO Dr. Vilhauer was heavily involved in the Texas Optometry Association and in supporting optometry legislation in Texas. Which he also plans to continue throughout his career. He also completed clinical rotations at a private group practice in Houston practicing full scope family optometry and at Northeastern State University College of Optometry in Tahlequah, Oklahoma, where he served the Cherokee Nation population and was exposed to a high level of ocular pathology.

Dr. Vilhauer’s primary interest is in general family practice, as he really enjoys developing a good relationship with his patients and addressing all of their concerns. He is also proficient in fitting specialty contact lenses and treating ocular disease. Dr. Vilhauer currently lives in Frisco, Texas with his cat, Skittles, and enjoys sports, movies, filmography, and spending time with family and friends.